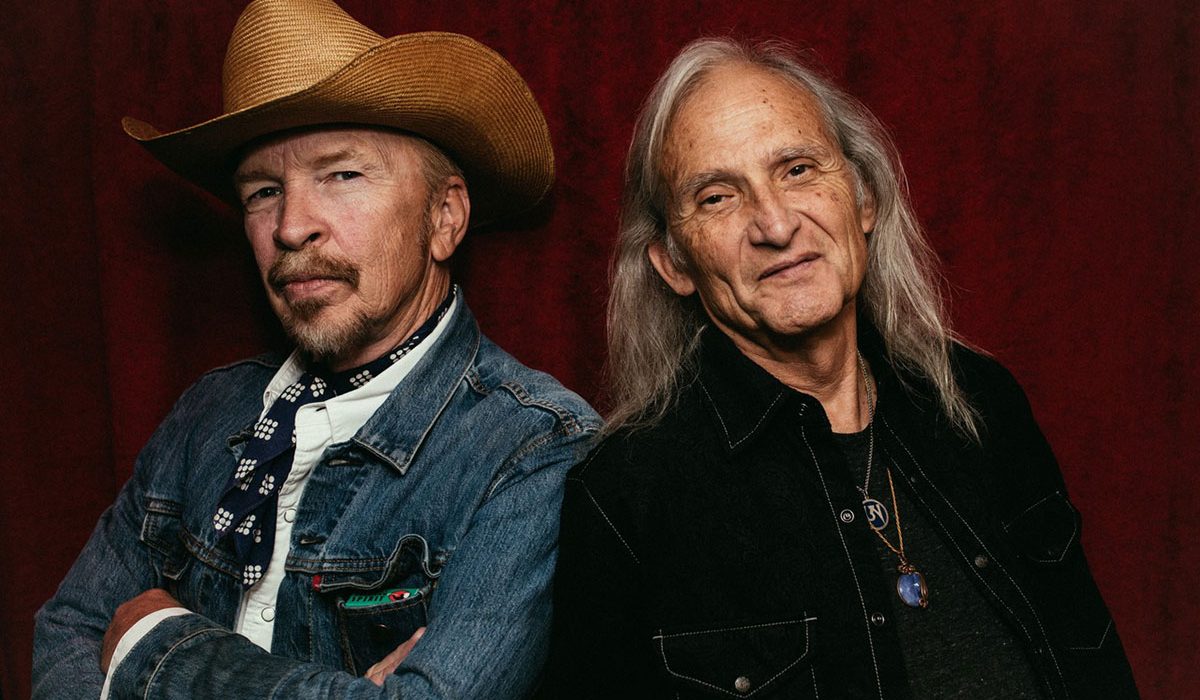 Downey, California to Lubbock, Texas is a thousand-mile straight shot across the heart of the American West, with not much in between. The cities at each end of the line are one-time cowtowns that grew into symmetrically-platted working-class communities with very little to interrupt the horizon plane, making for big empty canvasses that require a vivid imagination to fill in all that blank space.

Dave Alvin from Downey and Jimmie Dale Gilmore from Lubbock have been filling canvasses with music of the American West for decades, coming from two very different directions.

The title track explains Alvin is a Strat-packing, wild blues Blaster, a nod to the roots rock band he formed with his brother Phil in 1978 before Dave peeled off to go his own way in 1986. He’s been part of the bands X, the Knitters, and the Flesh Eaters, tours relentlessly with his own band, the Guilty Ones, and continues apace on musical quests informed by his love of California and its history, and by Texas and the South, where most of the great music that was made in Los Angeles before and after the Second World War came from.

Read More
Gilmore is the old Flatlander from the Great High Plains, acknowledging his first group, the folk-country trio formed in Lubbock 1972 with Joe Ely and Butch Hancock who continue performing and recording today. In addition to the Flatlanders and an extended solo career, he has been part of several ensembles including the Hub City Movers and The Wronglers with Warren Hellman, who started the Hardly, Strictly Bluegrass Festival in San Francisco.

Alvin is a rowdy baritone. Gilmore, the timekeeper of the high lonesome, warbles. Each is an avatar, an authentic, original creator with a strong sense of place and music.

That combination might seem like oil and water. But mixed together in the forms of these ten cover songs and two originals, including the autobiographical title track, this is powerful stuff.

The seed for the album was planted a little more than a year ago while the two did a duet tour. They’d known each other as friends for more than thirty years, but had never collaborated musically. Playing live together triggered a whole new dynamic. “Everything on that tour worked out so well,” Gilmore said. “The music was fun. During  sound check, Dave said, ‘You know, we need to record some of this stuff.’”

And so they have.

The recording is a mutual admiration society. “Dave’s got a soulfulness and intelligence in his presentation along with something I really relate to, an anarchic streak that’s anything goes,” Gilmore said. “That’s what it is that’s so kindred about us. In every other way, our music is different from each other. We seem to have a common attitude. We like everything, from sweet ballads to raging blues and country stuff.”

“It’s like we’ve been playing together since we were kids,” Dave Alvin said. “He’s got a lot of soul. Where sometimes I can be over the top, he brings a calmness, an ‘everything’s going to be all right’ effect, whether it will be or not. “

Gilmore’s voice captivated Alvin. “It kept blowing my mind what an evocative singer he is. He’s a great blues singer. When Jimmie sings the blues, the thing that kept coming into my mind was, ‘This guy sounds like a coyote singing the blues.’”

An unspoken symbiosis was in play. “If I started playing one of those old things I used to do, even before the Flatlanders, Dave would know the song,” Gilmore said. “Our styles were different but we knew the songs together. It was kind of a fluke. It was as if the repertoire was built-in without us knowing it.”

The Downey-Lubbock connection extended to Mexican border radio stations, whose powerful signals reached both places, delivering exotic sounds including doo-wop, wild rock and roll, and dirty blues, courtesy of Wolfman Jack. “We found out on these gigs we both loved New Orleans Rhythm ‘n’ Blues,” Alvin said. “We share all these influences.”

Somewhere along the way, they recognized another shared experience dating back to the nineteen sixties. The Ash Grove was the storied folk music club of Los Angeles where two music-hungry teenage brothers from Downey and a young drifter from Lubbock both experienced live performances by folks like Texas bluesman Lightnin’ Hopkins, Son House and Brownie McGhee that they’d only heard on records before.

“Jimmie never saw Lightnin’ Hopkins in Texas,” Alvin pointed out. He knew his music through records. He had to go to LA to actually bear witness.

Alvin had to go to Texas to see where all the music he’d grown up on had come from. “T-Bone and Texas Music to me is West Coast Blues,” Alvin said, citing how the diaspora from Texas and Louisiana filled California with musical heavies from Walker, Eddie Cleanhead Vinson, and Johnny Guitar Watson to Buck Owens and Merle Haggard.

Some songs were naturals, such as Woody Guthrie’s timelier-than-ever “Deportee – Plane Wreck at Los Gatos,” which presented a challenge for these Sons of Woody mainly because hundreds of versions already existed. (They pulled it off; their version sounds like none other.)

They pay respects to three contemporary songwriters and friends who have passed on: Steve Young, John Stewart and Chris Gaffney, with their covers of “Silverlake,” “July, You’re a Woman,” and “The Gardens.”

“We were playing a show and Jimmie introduced the song ‘Silverlake’ by telling this story about Steve Young calling him up and saying, ‘I want you to sing this song that I wrote,’” Alvin recalled. “My mouth dropped. I said, ‘Wait a minute. Steve Young came to my house in 1990 and he told me he wrote this song for me – same song. “

“Yeah, but Steve said he wanted me to sing it,” Gilmore parried back. “He just wrote it for you.”

“Some of the songs we worked up on gigs,” Dave Alvin said. “It was just the two of us sitting together. It wasn’t exactly stump the band, but more like ‘Do you know this one?’ ‘This Sam Cooke song?’ ‘This Merle Haggard song?’ A good chunk of the album was what we did at these shows. We did the Youngbloods’ song (“Get Together”) every night.

“Jimmie said my favorite thing I’ve ever heard in a recording studio,” Dave Alvin said. “There’s a guitar solo on ‘K.C. Moans’ that I thought might be too over the top and Jimmie said, ‘There’s a time when more Blue Cheer is better than less Blue Cheer. And this is a more Blue Cheer time.’”

“Dave brings an intensive shot of energy,” acknowledged Gilmore. “Both of us are intellectuals. But we also have that crazy streak. Musically, we like being not intellectual. It’s been an inspiration playing with Dave. We both have a passion about the music. It may not be similar in form, but it’s similar in the underlying drive, and I think we both recognized that from early on.” “You go in with, ‘Let’s see what happens: These are great musicians, let’s see what happens.’ Playing music is an educational process. I’m still figuring stuff out,” said Alvin.”Downey and Lubbock. There’s a metaphor for life’s long journey in there.”

Taking on all kinds of American music from the 1920s to the present is a very ambitious, very difficult feat to pull off. These two very particular, very peculiar, very not intellectual music makers make it a joy to behold.